The UN also estimates that there were 79.5 million people forcibly displaced worldwide at the end of 2019. Among them, 26 million are considered refugees and half of them are minors. Even more alarming, the number of refugees who return to their country each year is now at 385,000. In the 1990s, however, this number was an estimated 1.5 million.

Sixty-eight percent of all refugees come from just five countries: Syria, Venezuela, Afghanistan, South Sudan, and Myanmar, and thirty-nine percent are hosted in five countries: Turkey, Colombia, Uganda, Pakistan, and Germany. Children are some of the most impacted by the refugee crisis as forty-two percent, an estimated thirty-five million, of the eighty-two million people forcibly displaced from their country were under 18 in mid-2021. There are also an estimated one million children born with refugee status. 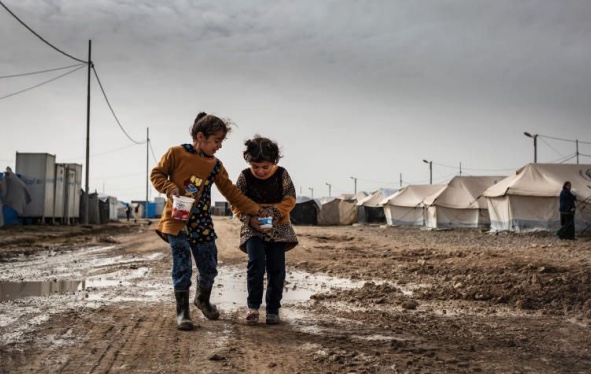 But refugees are much more than numbers in statistics. Refugees are people suffering from being displaced from their countries due to violence, war, prejudice, poverty, hunger, or discrimination. Often a combination of these circumstances. They are forced to leave their communities, cultures, friends, and family behind, everything they have known so far, to venture into the unknown. Then, they are met with intolerance and xenophobia in the places they seek shelter.

Twenty-two percent of the world’s refugee population lives in refugee camps, temporary facilities built to provide immediate protection and assistance to people forced to flee. They are not meant to become permanent solutions, but the difficulty with entering countries and crossing borders is making more and more people stay in them for extended periods of time.

Refugee camps offer shelter, water and sanitation, food, healthcare and counseling, emergency relief items (such as blankets, mosquito nets, sleeping mats, or clothing), registration, and legal aid to assist them in their legal entry to the country. Some long-time refugee camps have even expanded to include services such as education or livelihood opportunities as they have hosted refugees for decades, providing asylum to several generations in a family. These conditions, however, are often insufficient, as refugee camps are underfinanced and understaffed.

Climate change and its effects are worsening refugee and asylum-seekers communities worldwide. It is causing more people to be forcibly displaced due to natural disasters −like floods, fires, or hurricanes and tropical storms−, and aggravating the situations of those that are in a host country and hamper their possibilities of returning to their country of origin.

The refugee crisis is a long-standing crisis that international politics keeps undermining and delaying its resolution as its impact is mainly in developing countries. In some developed countries, refugees are used as a political tool between political parties or even nations. The media should work towards amplifying the voices of refugees and stop the spread of misinformation that may fuel hate towards them. Additionally, while helping NGOs dedicated to bettering the living conditions of refugees worldwide is crucial short-term, long-term structure and solutions depending on governments and international organizations are needed.

We ought to hear the stories of millions and push our governments to seek an answer to their needs that is sustainable with our countries’ resources and possibilities.